Recently, while reading my “Mass Media & Society” textbook, I came across the following picture. 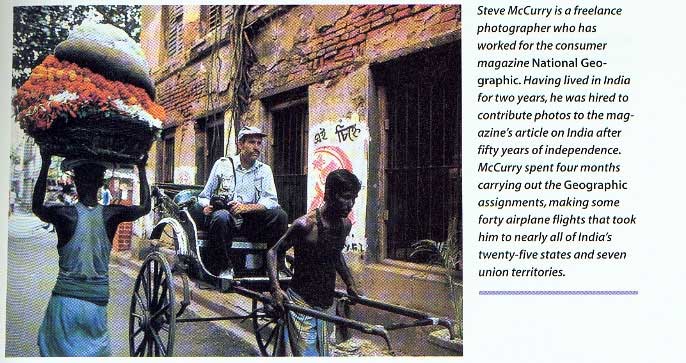 Considering the fact that this photograph is atypical of most indian cities, I complained to the author of the textbook, who happens to be my professor. Below is the exchange we had (on the positive side, he does mention the magazine “Little India” in a positive manner, and even gives screenshot of the website). Anyway, the point of this is that this kind of stuff happens in many, many textbooks used in US Universities, and most people don’t bother to complain. But, this proves that there is hope. If the author is unresponsive, the publisher should also be notified. It’s not hard to find these folks.

It’s too bad that there is no Hindu organization that actively looks for and reviews this kind of stuff.

Hi. I’m a student in your Comm 130 class, and while reading your textbook (yes, I do read the book), I came upon a picture that I believe is untrue and unnecessary.

The picture in question is on page 145. I assume the purpose of the picture is to show how freelance photographers get hired by magazines to shoot what they understand well. I looked at the photo credits, and saw that Steve McCurry himself provided the picture. Now, that puzzles me greatly. For a man who lived in India for 2 years, why would he provide a photo of himself being driven by a human-rickshaw in front of a building with a Communist sign? Sure, there are 2 communist parties in India that have very little
power, and there are a few human-rickshaws, but these are not very common at all (i.e. not mainstream and widespread). This is synonymous with someone taking a picture of himself in a poor neighborhood in the Deep South, in front of a KKK placard, representing the United States of America. This photo provides a false representation of India. I was born and raised in New York and New Jersey, but this offends me as an Indian American who has visited India.

In addition the caption reads that he has visited many places in India, over the 4 month assignment. Therefore, the implication is that many places in India are like this photograph. Again, this is simply not true. Though it is good that you have not used the stock photograph of the Taj Mahal, this photograph does not correctly represent India. I would like to request that you not use this picture in your next edition. India and Indians have taken enough bad press in the mainstream media channels (i.e. New York Times) that
it is unnecessary to add to this in university texts. I believe you could have made your point about freelance journalists another way.

P.S.
Mr. McCurry’s website (www.stevemccurry.com). None of his pictures are that positive towards South Asia. For some reason, the western media very rarely chooses to show the positive aspects of India. Mr. McCurry is good photographer, but he shoots the wrong things.

Thanks for your comments about the photo. It was chosen by a Houghton Mifflin photo editor, who gave me the material to write the caption. That does not, of course, absolve me from the responsibility of it appearing in my book.

The Communist party sign may well have been part of the point of the picture (ie the exploitation of the person pulling the vehicle), though it didn’t occur to me until you brought it up. I can understand your concern that India not be portrayed negatively, though given the great diversity of the country it would be hard to find something absolutely typical. Your anology to a photo in the Deep South is probably an one, though.

I’m sorry this photo offended you. It will not be included in the next edition.