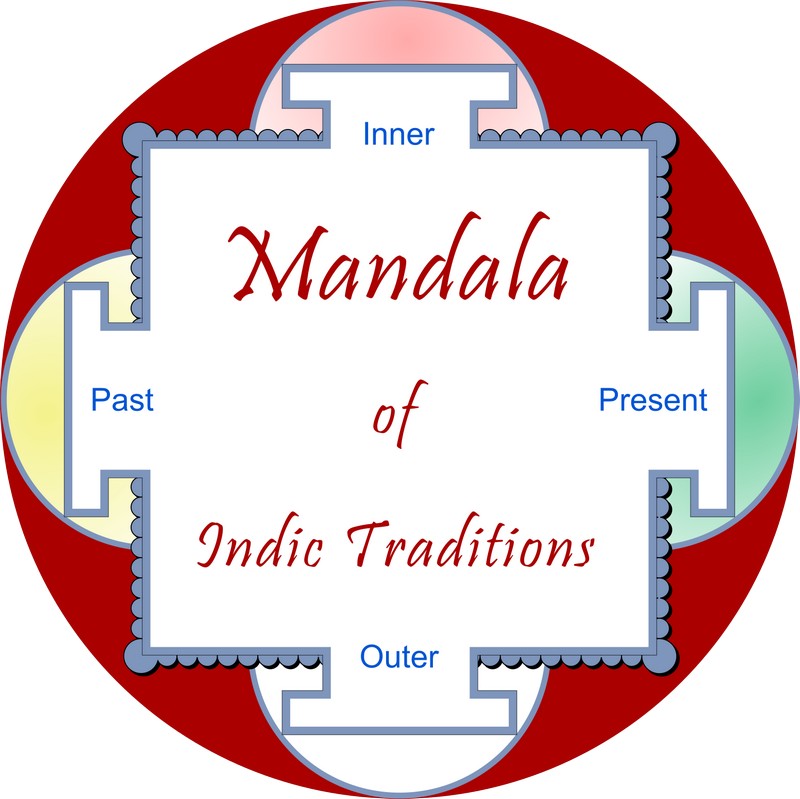 The above mandala diagram shows four gates of entry to the study of Indic traditions. While there may be considerable overlap between the subjects and disciplines distributed among each of these four gates, nevertheless these four represent approaches or orientations toward Indic studies which are typically (if artificially) kept distinct.

Most individuals are usually drawn toward or exposed to Indic traditions from a perspective represented by only one of these gates. While a great deal may be learned from any one of these perspectives alone, such a one-sided approach invariably yields a distorted understanding of India and of Indic traditions as a whole. Thus, by presenting this mandala in its entirety we intend that audiences initially drawn to (or even expert in) one gate will be inspired to travel around the mandala to encounter and learn the perspectives of the other gates. In this way, once one is better educated about each of these four perspectives, one will have a more informed, nuanced, and holistic understanding of Indic traditions and may then be said to be truly “inside the mandala” of Indic studies. Once “inside” in this sense, one will have a different understanding than one did from the “outside” when one thought that India and her traditions were adequately understood via the one gate through which one was accustomed to viewing. This mandala construct is thus a device designed to encourage persons with these different perspectives to develop, enrich, and transform their understanding of India. We believe that when sufficiently implemented on a large enough scale this has great potential to trigger multiple paradigm shifts in both Indic studies as well as in popular portrayals and understandings of India and Indic traditions.

The vertical axis of this mandala is more synchronic and spatial (inner-outer) in nature, emphasizing the domains of inner and outer arts and sciences, while the horizontal axis is more diachronic or temporal (past-present) in nature, covering portrayals of India’s past history and present society. Again, any of these four can be seen to be interrelated, but they tend to represent typically separate orientations toward Indic studies. Our goal is to support not only improved scholarship at the entry point represented by each gate, but to develop a more holistic view of this mandala through promoting and supporting greater interdisciplinary engagement among scholars. Thus, for example, in addition to studying kings and wars, historians should consider the history of India’s inner sciences and its traditional knowledge systems (TKS). Study of the latter reveals the enormous economic activity that made Indian society so materially rich that it attracted military incursions in the first place. Without appreciating such TKS’, historical portrayals of India too often present invaders as bringing “civilization” to an economically primitive and socially feudalistic India.

Likewise models for understanding of “Society Today” will be far better informed through an appreciation of the disciplines of the other mandala gates. Without going around the mandala to develop a more “well-rounded” understanding of India, social and cultural phenomena in India today will too often be seen as exotica. A narrow approach which assumes that the source of India’s social and economic problems today must be found only within the Indic traditions themselves (as opposed to being in large part the legacy of the history of colonialism, for example) has often lead scholars of anthropology, social science, and religion to grossly misread Hinduism and Buddhism as “world-negating.” Ancient Sanskrit texts as well as contemporary beliefs and practices are then interpreted through that extremely distorting lens.

We believe that today the inner science and TKS gates have been explored the least and are the least well understood. Thus, while all four gates must be fully appreciated and thoroughly studied, far greater emphasis now must be placed on the study of these two gates. The histories, perspectives, theories, technologies, and methodologies of the inner sciences and the TKS’ will provide the foundation for a “thicker description” (and hence a better understanding) of India’s history and society today. These improved, more nuanced understandings will then feed back to better inform the other two, and we will have significantly advanced both the study of India and her diverse traditions, as well as our appreciation of what these rich traditions may yet have to offer to the global mandala.