The weatherman is proverbially the object of ridicule for his forecasts by the common man. Few people realise that the behaviour of weather and the climate machine is still an enigma, despite all the advances in weather sciences. Lorenz, the great mathematician and meteorologist, laid down the foundations of modern meteorology. Using his primitive computers he found out that even simple Persian wheel water lifting mechanisms are complex phenomena, not governed by linear maths. He was the first to point out the complexities of a multi-parameter non-linear system that the weather was. His famous paper on “Deterministic Nonperiodic Flow” perhaps is the most quoted paper in technical literature on chaos. Soon physicists, astronomers and even biologists were rediscovering the chaos, the maths of non-linear systems, predicted by Lorenz (Gleick 1988).

This year’s monsoon in India has created a lot of controversy. The weathermen predicted a normal monsoon, but it appeared to be below normal, at least in July. When after a string of accurate predictions, this year it seemed to fail, the Meteorology Dept (IMD) was faced with brickbats.

Sulochana Gadgil (2002), the well known meteorologist (not associated with IMD), explains that there is a competition for convergence of moist air (and hence rainfall organized over a large scales ) between the atmosphere over the Pacific Ocean and over the Indian region. Hence it is not surprising that increased cloudiness over the Pacific Ocean is associated with deficit monsoon rainfall in India. She also points out that important parameters need to be monitored on time-scales of weeks rather than months, not only in the pre-monsoon season but during the evolution of the monsoon in June as well.

She is however hopeful that as more data become available from satellites and buoys, the empirical models are expected to improve. With advance in our understanding of important facets of physics, such as interaction between ocean and atmosphere, and the role clouds and surface processes, the physical models will also perform better in future. We expect significant improvement in your understanding of the variability of the monsoon and hence forecasting, in this decade. However, even with overall decrease in errors of prediction, the models, whether physical or empirical, will fail occasionally. When dealing with complex and chaotic systems, one must be ready for surprises (Gadgil et al 2002).

C.K. Raju (in press), the mathematician and polymath, has come out with an ingenious explanation for this monsoon muddle. He says that the traditional Indian calendar uses the sidereal year. But the Indian calendar reform committee adopted the Gregorian calendar after independence. In its report, the Indian calendar reform committee, dominated by M. N. Saha and N. C. Lahiri, simply stated that it is obvious that seasons depend on the tropical year. The sidereal year involves the motion of the earth relative to the stars, and is MORE than 365.25 days (365.256363 days, approximately), while the tropical year involves the motion of the sun relative to the earth, and is LESS than 365.25 days. The difference between the two types of years is approximately 20 minutes per year, which can become substantial over long periods. If the monsoons depend only on the tropical year, then, because of the difference between the tropical and the sidereal year, it is the Indian calendar (of the meteorologists) that ought to have been out of phase by three weeks (around 21 days), which is what actually happened in the current year.

Scientific weather forecasting is thus admittedly a complex affair in which a multitude of parameters come into play in a non-linear system. Besides, unlike the USA, in India we have a limited number of data collection stations, which again puts constraints on our forecasts.

On the other hand, claims have been made by traditional Panchang makers that they are able to predict weather behaviour more accurately.

In the hills of Uttaranchal these predictions in the form of Panchang are recounted by the Brahmin priests who as Purohits go to their Jajmans and read out the predictions. These readings are widely known as the recital of the Samvatsar and are taken up on the first day of each new Hindu year, which is generally during March. This means that the predictions are calculated way ahead of the impending seasons. Despite the justifiable reservations about the veracity of astrology that many rationalists have, this leads us to ask if the traditional methods too have a scientific base and if they are reliable.

We would like to bring a recent paper to the notice of our readers for information and discussion, without any prejudice, as in ancient India the dividing line between astronomy and astrology was always thin.

S.K. Mishra et al have looked into this aspect of the weather forecasting in India in their paper published in the Asian Agri-History Journal. They say that in India, the classical Hindu almanac is known as Panchang. It is a very important book published yearly, and is the basic book of the society giving calendrical information of varied nature on daily basis and is extensively used by the people all over India. For astrologers, it is one of the basic books for making astrological calculations, casting horoscopes, and for making predictions. For farmers, it is an astrological guide to start any farming activity. Hence, it is a fundamental book, which is referred to by a large section of the people in this country for various purposes.

For undertaking the comparative study, Mishra et al selected four oldest local panchangs of Varanasi, each of last fifty years (1946-95). These, along with the years they had completed until 1998, were: (1) Drik-siddha Panchangof Sampurnanand Sanskrit University, Varanasi (122 years); (2) SriGanesh Panchang (119 years); (3) Hrishikesh Panchang (109 years); and (4) Vishwa Panchang of Banaras Hindu University, Varanasi (72 years). The rainfall predictions made in panchangs were then matched/correlated with the actual rainfall recorded by the IMD for Varanasi region on day-to-day basis at four levels (Lal, 1992, in Mishra et al 2002)

The word Panchang has its roots in two Sanskrit words, Panch (meaning five) and Ang (meaning body part/limb). These parts are: (1) Tithi or lunar day – there are a total of thirty tithis in a lunar month, fifteen in each fortnight; (2) Vara or week day – there are seven varas, namely, Ravivara (Sunday), Somavara (Monday), Mangalavara (Tuesday), and so on; (3) Nakshatra or asterism or constellation – there are a total of twenty-seven nakshatras, named according to the yogataras or identifying stars of each of twenty-seven equal parts of the ecliptic or solar path; (4) Yoga or time during which the joint motion of the Sun and the Moon covers the space of a nakshatra, also twenty-seven in number; and (5) Karana or half of a lunar day or half-tithi.

The ancient/indigenous methods of weather forecast may be broadly classified into two categories (Lishk, 1983 in Mishra et al 2002):

2. Theoretical Methods or Astrological Factors or Planetary Factors – Computation of planetary positions and conjunctions of planets and stars, etc; study of solar ingress and particular dates of months; study of Nakshatra Chakras; study of Nadi Chakras, Study of Dashatapa Siddhanta.

Mishra et al point out that according to Varaharnihira and others, the formation of clouds or pregnancy of clouds or ‘Garbha Dharana‘ takes place 195 days before the days of their fall or birth or delivery or ‘Garbha Prasava‘. According to them, symptoms of pregnancy are to be detected when the Moon transits the asterism (nakshatra) of Purvashadha, commencing from the first day of the lunar month of Margashira. Foetuses (clouds) formed in the dark-half will come out in the bright-half and vice versa; those formed in the day time will come out at night and vice- versa; those formed at dawn will come out in the evening and vice versa; if formed in the east these will give water in the west. For measurement of rainfall or rainwater, the unit of rain gauging was adhaka. An adhaka is the quantity of rainfall, which fills to the brim a circular vessel of width of 20 fingers in diameter and width of 8 fingers deep. Four such adhakas constitute a drona. The amount of rainfall in coming months/seasons/year is assessed on the basis of symptoms at cloud conception, position of the Sun and the Moon in the particular nakshatradivisions or zodiacs, and some related considerations.

According to ancient scriptures including those of Garga, Varahamihira, Parashara, etc., there are four types of clouds: Abartak, Sambartak, Pushkar, and Drona. If the dominating cloud of a year is Abartak, rain will be received in certain places in that year; if it is Sambartak, then in all parts of the country; if it is Pushkar, the quantity of rainfall will be very less; and if it is Drona, abundant rainfall will be received during the year. According to the ruling ‘planet’ of a year, overall rainfall of that particular year should be anticipated as follows: (1) Sun – moderate, (2) Moon – very heavy, (3) Mars – scanty, (4) Mercury – good, (5) Jupiter – very good, (6) Venus – good, and (7) Saturn – very low (and stormy wind). Three days in the month of Ashadha (June-July) have been specially selected by our ancient (astrologers) for observation of atmospheric conditions to determine the future prospects of rain. They are the days when in the lunar month of Ashadha, the Moon passes through the asterisms of Rohini, Swati, and Uttarashadha, respectively known as Rohini Yoga, Swati Yoga, and Ashadhee Yoga days.When the Sun and the Moon are in neutral asterisms, there will be winds; when they are in feminine asterisms, there will be lightning and phosphorescence; and when the Sun occupies a feminine asterism and the Moon a masculine asterism or vice versa, there will be rains. For predicting the monsoon and its subsequent effect on weather, all panchang-makers consider three different Nadi Siddhantas (Capsular Theories), commonly known as Nadi Chakras. These are: (a) Dwinadi Chakra, (b) Trinadi Chakra, and (c) Saptanadi Chakra, named after grouping all the nakshatras into two, three, and seven categories respectively according to specific criteria.

Like different signs or indicators of future rain and immediate rain, the ancient astro-meteorologists have also keenly observed, examined, and documented a number of signs of drought or scanty rain. Those signs are again of varied nature and are from (1) planets and nakshatras; (2) symptoms at pregnancy of cloud; (3) wind blow; (4) rainfall; (5) planetary conjunctions and planetary conflicts; (6) the union of different genders of planets or nakshatras; and (7) creepers and plants, etc.

The encouraging and favorable results of some past studies, prompted Mishra et al to devise an “Agro-Almanac” or Agro-Panchang or Krishi-Panchang exclusively for the benefit of farming communities and those interested in agricultural development. A Krishi-Panchang may be defined as: a basic astro-agricultural guide book/calendar to be published annually, giving calendrical information on various aspects of agriculture and allied activities, basically suggesting region-wise, season-wise, and crop-wise strategies based on astro-meteorological predictions, giving auspicious/inauspicious time for undertaking avoiding various farm-related operations, along with a list for performing religious rites, festivals, observing fasts, etc. and some non-astrological agricultural guidance, primarily useful for the farming communities and persons interested in agricultural development.

Since there are quite a number of Panchangs in vogue, which vary in their forecast, Mishra et al have compared four Panchangs for their veracity: 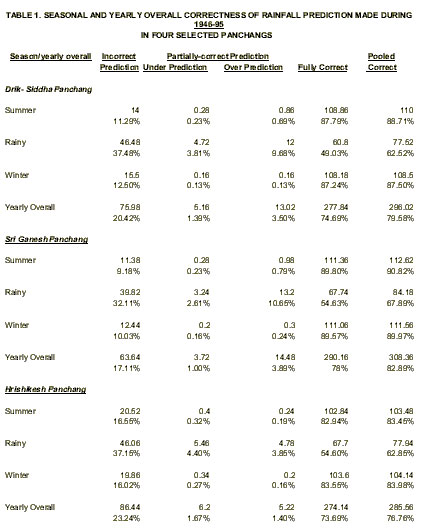 Mishra et al explain that the Krishi-Panchang is meant to meet agricultural needs, hence most of its content should relate to agricultural information. In addition to this, basic information such as annual date calendar, list of holidays, and auspicious days/ moments of the coming year should be given for the benefit of farming communities.

We have presented both the difficulties of weather forecasting by modern meteorologists and also the claims of traditional Panchang makers, for an objective assessment.