Earthquakes don’t kill; badly built houses do. Though this is a time-tested lesson, it is often forgotten soon after an earthquake. Already, lessons of the massive January 26 quake that ravaged Gujarat are being forgotten. But, quakes are not new to India as 55% of the country is prone to seismic shocks. Several earthquake prone regions in the country have traditionally built houses that minimize the damage to life and property and stand up well when the quake hits. These techniques are based on traditional material that have been used to build such houses—timber and bamboo, for example—The traditional wisdom and attention to detail can be applied to modern materials as well.

No building can remain entirely free of damage during a quake; still, all houses, big or small, can be made safer. Structures can be made to withstand earthquakes of a particular magnitude by taking certain precautions. Buildings collapse as a result of inertial forces. During an earthquake, the lower part of a building tends to vibrate as it is in direct contact with the ground. The forces of inertia, however, keep the upper portions static. This conflict of forces leads to collapse.

The magnitude of these forces is directly proportional to the weight of the building—the heavier the structure, the greater is the damage. If the structure is light, lesser number of people die in case of a collapse. Avoiding compression structures like domes, vaults and arches is another option, according to architect Das Gupta. The structural system needs to be tensile and the material should be flexible, as is the case with timber, steel and bamboo. It also helps if the structure is constructed in a way that it vibrates as one unit and sways together. Traditional constructions in India’s Northeast follow this principle. So also the tall sky scrapers of Tokyo. One can even notice their swaying if there is a strong wind.

At 2.53 am October 25, 1991, a moderate earthquake measuring 6.6 on the Richter scale affected more than 425,000 people of about 2,100 villages in the districts of Uttarkashi, Tehri and Chamoli in Garhwal Himalayas in the hill state of Uttaranchal. Traditionally built timber houses proved to be the most effective at keeping damage at bay. It would, however, be incorrect to say that the old-fashioned houses survived just because of materials used. The construction techniques, too, determined the amount of damage.

Most new constructions with heavy roofs (slate tiles or RCC) supported by weak walls (random rubble in mud mortar) proved deadly. Older houses at higher elevations have timber roofs held together by timber ‘tie-bands’- horizontal timber beams spanning across the entire building, connecting the entire structure and giving it the character of a cage. Such houses suffered little damage despite the mud-and-stone masonry.

Quake resistant houses should have tie-bands just above the level of the floor, the level of the doors and windows, and another at the roof level. Corners are the most vulnerable and ought to be strengthened. Elasticity of the structure can be enhanced with flexible steel rods or wood batons at corners. Doors and windows should be few, small and symmetrically placed away from the corners. The house should be as light as possible. 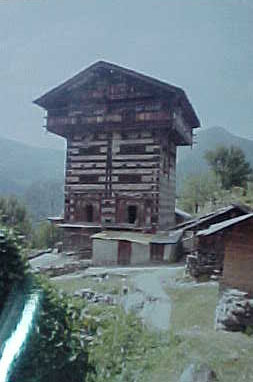 An example of a quake-proof house.

In a recent paper, Saklani et al (1999) have tried to bring into focus the old quake-resistant traditional architectural design of the huge multistoried building constructions found in the Garhwal Himalayas.  The Garhwal Himalayas representing a mountainous zone on the northwest of India constitute a portion of the great Central Himalayan region, which is known for high seismicity and therefore the presence of such structures here is of remarkable occurrence. The authors report building structures, five to six stories high in the region, that have endured the ravages of time, weather and geo-activity for hundreds of years. The authors refer to the Yamuna and the Bhagirathi river valleys in the Garhwal Himalayas, where these multistoried constructions are locally known as Sumer, Chaukhat or Kothi. These structures have withstood a number of earthquakes, including the recent severe ones of the 1991 and 1999.

The indigenously devised building technology used to erect Sumers makes use of locally available resources such as long thick wooden logs, stones, slates and clay to specification. Typical  Sumers stand 15 to 17 meters high from the ground level and have 5 to 6 floors, with 4 rooms on each floor. The ground area covered by the Sumer is 8, 6. 5 meters. A foundation trench 3 meters deep and 70 cms wide is first dug and then refilled with flat dressed stones. This foundation is then raised above the ground in the fashion of a rectangular platform, to the height of 2.30 meters with the help of flat stones, clay and stone fillings.  The structure of the Sumer rests upon this platform. To raise the walls, double wooden logs are placed horizontally on the edge of the two parallel sides of the platform, which are opposite each other. The width of the logs determines the thickness of the walls, which is 70 cms. On the other two parallel sides the wall is raised with well-dressed flat stones to the surface level of the logs placed on the other two sides. The walls are further raised to 30 cms by placing heavy, flat, dressed stones upon the wooden logs on the two sides and by placing another pair of wooden logs upon the stones on the other two opposite sides. The four walls of the structure are thus raised using the wooden logs and dressed up flat stones alternately, up to a height of about 17 meters. The structure is further reinforced with the help of wooden beams fixed alternately that run from the middle of the walls of one side to the other, intersecting at the center. This arrangement divides the Sumer into four equal parts from within and provides for joists supporting the floorboards in each floor of the building. On the fourth and the fifth floors the Sumer has a balcony, with a wooden railing running around on all four sides. The fourth floor is also provided with a toilet cum bathroom on the balcony. Specially designed wooden ladders provide access to the different floors, which are located within the Sumer. The roof of the Sumer is laid with slate stones.

The Sumers are ascribed to the Rajput families inhabiting the area in the past who built these to function as watchtowers and to provide for the defense of families living in an area, rather than for the protection of a single family.

The authors point out that structures comparable to the Sumer, with some variations have been reported from elsewhere in India, Pakistan, Afghanistan and Nepal, all in the Himalayan- Karakoram earthquake zone. They emphasize upon the need to carry out further research in this regard so that the technology, with some modifications to suit the present day resource base, could be utilized advantageously in the seismic zones that hold portents of disaster in the near future.

We were a bit intrigued as to why such structures were allegedly made only as watch towers for the defence of the village.   This innovative building technology was good for any house to withstand the vagaries of nature and earthquakes. We undertook a field survey of such buildings in the upper reaches of the Ganga and Yamuna valleys.

We found several multi-storeyed structures in the Yamuna and the Ganga valleys in Uttaranchal. These structures are peculiar to the traditions of the area and have been found to be resistant to earthquakes. Such multi-storied, typical old building structures in the area, are indeed remarkable for their high rise structures that are still intact in this mountainous zone characterized by high seisimicity. We found that this peculiar building technology was applied widely and extensively in case of all the old building constructions whether they were single storeyed, double storeyed or taller. The spread of the area where such constructions occur encompasses the entire Yamuna valley but are more predominant towards the west of the valley.

The words used in local dialects for such structures are Kuda, Thaat, Pherol, Chaukhat and Sumer.

The technology applied on the Chaukhats itself is reminiscent of a machine stitch on a fabric that keeps a piece of cloth in shape. In like manner the technology makes use of wood, like a thread and keeps the entire structure intact against the ravages of weather and geo-activity. Though heavy and flat stones are used, wood predominates the structures of whatever dimensions they are.

Technology used in the Chaukhats

Such time-tested technologies for building quakeproof houses are available in the Himalayan region. When half of India is quake-prone, this building technology should be given due consideration in designing quakeproof housing in such seismically sensitive zones.